Without a second season, we will never learn who will be the next opponent for Anos Voldigoad since the central mystery about the fake demon lord is solved. If nothing else, there is still plenty of recognition that Anos needs to reclaim.

The only way to learn that without a continuation would be to read the source material, but most fans will wait for a sequel in anime format instead. Watching anime is just what people prefer to do.

The problem is that The Misfit of Demon King Academy Season 2 didn’t get officially announced yet in 2021. And we don’t know what the odds are that another season of Maou Gakuin no Futekigousha will get green-lit.

How Can We Figure Out If There Will Be The Misfit of Demon King Academy Season 2?

I spent several years looking at various anime series to learn why some got a sequel and why most of them never did get another season announced.

I discovered that checking the source material, sales, and popularity is the best option to determine the likelihood of a continuation getting announced in the future.

I will present the information that I examined in 3 short sections and tell you if you should expect that The Misfit of Demon King Academy Season 2 will get announced in 2021.

Let’s start with an in-depth examination of the source material.

A large majority of anime series in 2021 are just adaptations of an already existing source material. It can be anything from manga, mobile games, light novels to even manhwa.

For The Misfit of Demon King Academy, the source material is the light novel.

There are two main points we need to check in this section of the article. The first one is how many volumes of the light novels are there, and if the story is still ongoing. It may be the case like for Classroom of the Elite Season 2 that the series is just at the beginning, which would boost the chances of continuation.

The second essential thing to examine is how many books got used for the anime’s first season. Sometimes the anime does use all the available stuff, like in the case of OPM and why One Punch Man Season 3 is taking so long to get announced.

How many volumes of The Misfit of Demon King Academy are there?

There are currently nine light novel volumes of The Misfit of Demon King Academy released in Japan. There is also a manga adaptation serialized online via Square Enix’s Manga UP! website.

Is The Misfit of Demon King Academy still ongoing?

The Misfit of Demon King Academy novels is still ongoing. The latest volume by the author Shu got released in Japan on October 10, 2020. And the average release rate of the light novels is three new volumes per year.

Which light novels does the anime of The Misfit of Demon King Academy cover?

The first season of The Misfit of Demon King Academy anime that aired in 2020 adapted volumes 1-3. That means light novel volume 4 continues where the anime ended.

CONCLUSION FOR SOURCE MATERIAL Six books didn’t get used for the first season of the anime. That should be enough for two more seasons, considering the first season used only three volumes.

If there is one main reason why most anime series never get a sequel, it would be because they failed to make enough profit for the production committee. It’s not unusual for an anime adaptation to lose money as Tokyo Ravens anime did, and that’s why there will never be Tokyo Ravens Season 2.

A one-cour anime television series like The Misfit of Demon King Academy can cost up to 3,000,000 dollars to produce.

So now, let’s look at how well this series delivered in terms of money. If the series didn’t make a satisfying profit, it could be a big blow for season 2 chances. Goblin Slayer Season 2 or Wise Man’s Man’s Grandchild season 2 are sequels that still have a chance to be announced even with not the best sales.

The Blu-ray sales for the first volume are around 2,663 copies sold. That’s decent, and it’s for the first two weeks only, so it should sell a few hundred more.

Selling close to 3k per volume is good, considering there is also streaming money in 2021. I was hoping it would be closer to 4-5k because that would be a massive boost to the probability of a sequel getting green-lit. Youjo Senki Season 2 is an excellent example of a sequel that will get announced because the first season sold 7k on average.

Selling 15k without anime adaptation is great for most light novel series. It looks like the boost from the anime was tiny. The sales didn’t improve even 5k on average for the light novel sales.

Merchandise is too soon to judge since the series just ended. Currently, there are two figures and around 100 pieces of goods so far. I hope it will increase to 5 -10 figures and about 150-200 goods to boost a sequel’s chances.

I don’t expect it to hit Konosuba numbers with 95 figures and 1000 goods, but it would be awesome if it did. There will be Konosuba Season 3, thanks to the great merch sales. If Maou Gakuin no Futekigousha can hit just 20% of that, it would help a lot with season 2 prospects.

The above are just the main methods an anime adaptation can make a profit. I won’t post all of them here because the rest is usually only a small part of the profits.

But here are a few examples for The Misfit of Demon King Academy – OST, ending/openings songs, web radio, international license for Crunchyroll and Funimation, streaming on both of them, various collaborations, and more.

CONCLUSION FOR SALES & PROFIT It is too soon to judge the sales, but the profit looks average so far. The series didn’t lose money, but it didn’t make a big profit either, from what I can tell. It will be easier to tell how well it’s doing in terms of money next year

Now let’s look at how popular this series is and how much the anime boosted the popularity. To do that, we will look at the official website, social media, MyAnimeList rankings, Google trends, copies in print, and new merchandise.

I expect the popularity to be at the maximum level since the anime ended recently.

The more interesting thing will be when I recheck this next year, and we will see how well it’s doing then. There are times when it takes just one year for fans and even the production committee to lose interest in the series.

The popularity peaked before the end of the series. It looks like it was on episode 2, and after that, it started to decrease. Interesting is that episode 10 did increase the popularity again a little. Now it’s just about 40% of what it was at the peak.

The Misfit of Demon King Academy is ranked number 373 in popularity with around 395,000 members. That’s not a small number of fans, but most anime series will hit the 300-350k mark in a year. I would be more positive if it can do 400k+ in a year.

The Misfit of Demon King Academy has 1.800.000 copies in print as of 2021/03. The latest volume got released a few months ago. The series printed extra 500,000 copies, thanks to the anime adaptation and a new light novel book so far.

New merchandise is usually a good indicator of popularity. All you need is to look at Overlord or No Game No Life. They both get new goods every month, so no wonder there will be No Game No Life Season 2 and Overlord Season 4.

CONCLUSION FOR POPULARITY I believe we will get a better idea of this franchise’s popularity next year. The most important thing is how the popularity will hold once the anime ended for a season 2 chances.

Will There Be The Misfit of Demon King Academy Season 2

The sales for this franchise aren’t bad, but they aren’t exceptional either. It’s hard to tell the chances for The Misfit of Demon King Academy Season 2 currently. It’s too soon to tell how much the anime helped.

One similar anime with demon lord recently got a sequel announced. Maybe this one will surprise us with a sequel as well. I’m talking about How Not to Summon a Demon Lord.

I think we will get a much better idea about the chances of season 2 next year. Maybe we will get lucky, and a sequel will get announced even before I update this article.

Update: The Misfit of Demon King Academy Season 2 got announced on March 6th.

This article will get updated later this year, with updates about the release date. In the meantime, you can check the anime-continue category if you are curious about the chances of some other series receiving a continuation.

I hope this article helped you understand that The Misfit of Demon King Academy Season 2 was already confirmed in 2021. 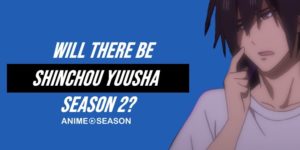